Simon Doonan Interview on The Asylum and Fashion 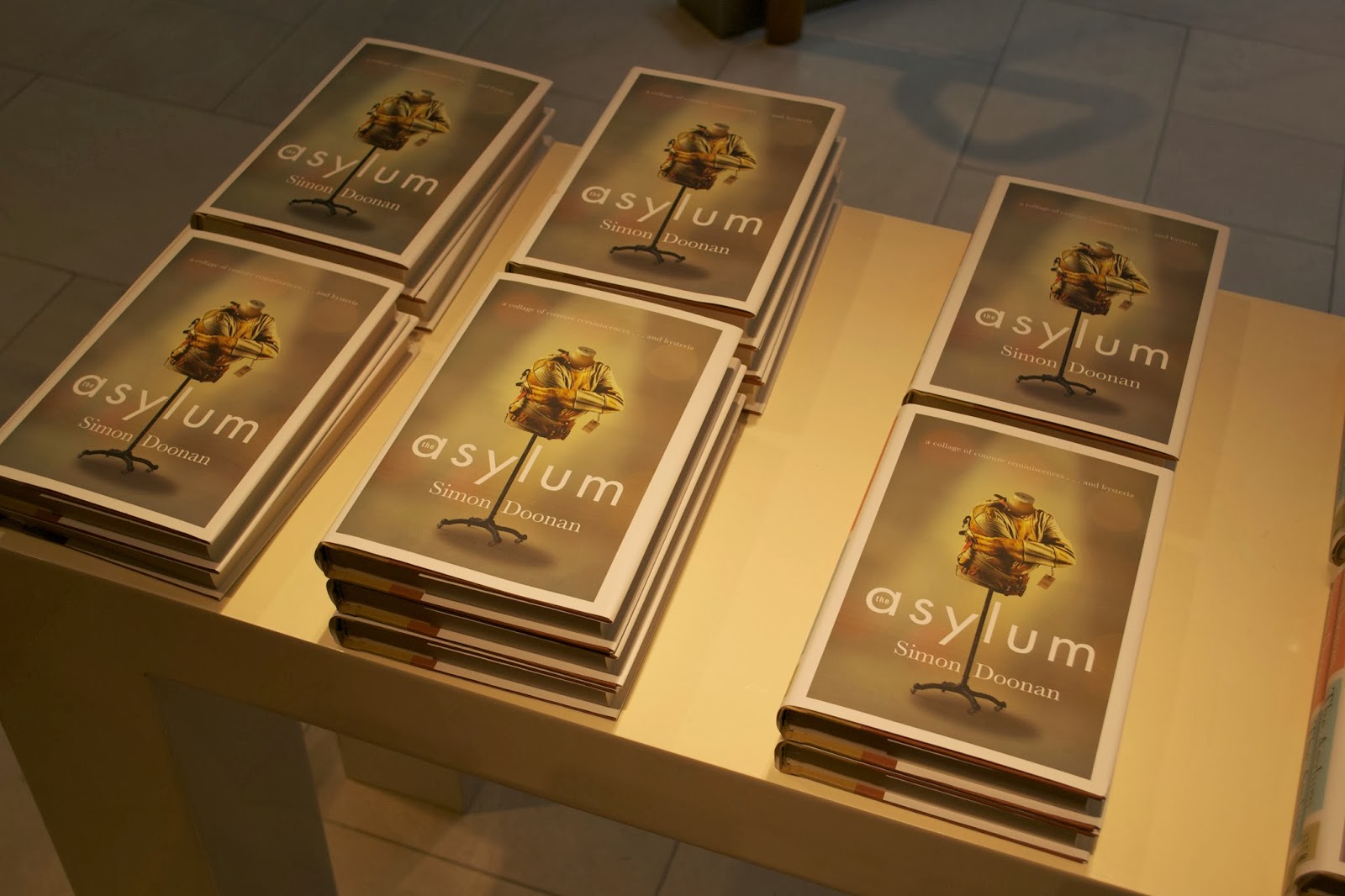 Simon Doonan, author, fashion commentator, and creative ambassador at large of Barney’s New York is one of culture writing’s funniest voices. His latest book, The Asylum, is a hilarious collection of autobiographical essays full of wit about his time in the fashion world after nearly a lifetime spent in the industry. The Slate columnist is ready to fill us all in on kooky and cut-throat secrets about his peers, that will have you rolling over in your chair. These real-life stories of glamorous madness and stylish insanity will also leave you pausing for bathroom breaks from time to time in between chapters.

Doonan has witnessed models unable to work for fear of ghosts, gone deep-seas fishing with a couturier pal and his jailbird companion, and watched Anna Wintour remain perfectly calm while the ceiling fell-literally-in the middle of Fashion Week. Once you start reading, he says that you’ll notice telltale signs of lunacy everywhere. Style insiders see patterns and trends in everything; they suffer from outsize personality disorders and delusions of grandeur; and of course, they have predilection for theatrical makeup and artfully destroyed clothing. No one is more suited to the asylum than the truly die-hard fashionista-after all, eccentricity and extremism are the foundations of great style.

the Chicest Degree sat down with one of fashion’s most innovative characters for an interview to get the scoop on The Asylum and Fashion during his book signing at Barney’s New York.

Chloe Manigo: Firstly, The Asylum is witty and insightful. What are our thoughts on injecting more humor and more fun into fashion?

Simon Doonan: Well that’s always been my mission, with my window displays and the advertising stuff I’ve done over the years at Barney’s that was always my mission to inject humor into fashion, style, and luxury. That has always been the driving force with my work for decades.

Chloe Manigo: Why do think most fashion writing is so bad being that fashion is more of a visual experience?

Simon Doonan: Essentially you’re writing about something that is a visual medium. I don’t write about fashion, I avoid it. This is the first book that I’ve ever written that is so focused on fashion. I tried to focus on the stories that would make my father love because fashion is such an esoteric world. Very often fashion articles would be almost better if there were a lot of pictures with little captions, which is what bloggers tend to do but the idea that there’s endless reams of things to be said about fashion an image speaks to you in words.

Chloe Manigo: One of the minor themes in your book, compared to previous generations people were more careerists and more informative about the industry they were in. Would you agree that people of this generation now are a little bit boring?

Simon Doonan: I think the fashion landscape has never been more interesting than it is now, because it’s so vast. There’s so many ways to get involved in it. It was almost unrecognizable when I first started there were only so many jobs you could get. Now there’s a lot of product, you could get any look for many price points at any given time of day or night. It’s gone from being this small universe to being this vast universe. It’s never been more fun than it is now. I think maybe people may have gotten it confused that fashion is Red Carpet gowns, to me there’s a bit more to fashion but that’s an understandable mistake to make with everything being based around celebrity.

Chloe Manigo: You also make a strong argument in The Asylum against handing the internships that will turn into jobs to children of the elite. With the fashion industry becoming more saturated and the job market being a bit scarce it seems that knowing someone or coming from a financial stable family is the only way to get your foot in the door.

What would you suggest to the individual going about it the traditional way?

Simon Doonan: Well, for me I’ve always been in retail and it was my entry into fashion and it still is. I found retail to be great, and I encourage kids to explore retail and not overlook it. I started off on the selling floor, got involved into display for many years, and then advertising, marketing and PR. My career started off through sales and people might think sales is a dead end and it’s not. I went into it with very low expectations and didn’t believe anyone, but now I think its tough because people have such high expectations.

Chloe Manigo: I have to ask, what were your thoughts on the Rick Owens show and do you agree that there needs to be more diversity in fashion?

Simon Doonan: I get upset when I go to shows and their isn’t enough diversity on the runway, it actually makes me physically depressed.

Chloe Manigo: At times, it feels like it’s a bit challenging for people of color trying to make it in the fashion industry now more than ever.

Simon Doonan: I don’t understand, the first shows that I ever saw it was mostly women of color and exotic girls from India and all parts of the world. The shows in the 70’s and 80s were very diverse, I don’t know what happened. I think now people are starting to question it and trying to understand it. Something is wrong, as an immigrant myself isn’t America supposed to be the place for diversity and opportunity for everyone. That’s one of the reasons why I put it in my book. The tendency of people with influx’s of power that give all of these internships to children of wealthy people or children of actresses. The people who are really creative and make an impact on fashion are often from the boonies, outside of privileged society like myself Kate Moss, John Galliano, and Alexander McQueen come from the working class. It’s not good for fashion, the people that are the most creative are invariably not from the upper echelon of Brentwood those people make great customers but aren’t great creatively.

Chloe Manigo: Towards the end of The Asylum you mentioned that fashion bloggers tend to take things out of context. Do you like blogging and the evolution of fashion blogging?

Simon Doonan: I think we are living in a time period where its about people and their point of view, and blogging is a great opportunity to do that. At the end of the day if you want to report designer fashion, you have to sell it and that’s getting lost a little bit. When you see a buyer and they’re sitting in the second row and a gifted blogger is seated in the front row, things have completely changed. The shows used to be one half retail and the other half clients in Paris in the early 70s and 80s. You’d go to a Saint Laurent show and their would be row after row of buyers there to buy. Selling designer clothes to clients is a massive undertaking, it’s easy to ramble on about what’s on the runway now that isn’t even in the stores yet. It’s gotten slightly confusing, if bloggers really care about fashion they need talk about what is available to the consumer now, that’s what is going to secure the future.

Chloe Manigo: How was it being locked in Barneys with Leandra Medine?

Simon Doonan: Leandra Medine is an original creative force and appreciates that fashion is about craft and imagination.

Chloe Manigo: What was the best career advice you’ve ever been given?

Simon Doonan: The best career advice I’ve ever been given was from Tyra Banks. “Don’t get it twisted” people tend to get things too twisted now because they’re focused on what they have or haven’t accomplished yet instead of just having fun. 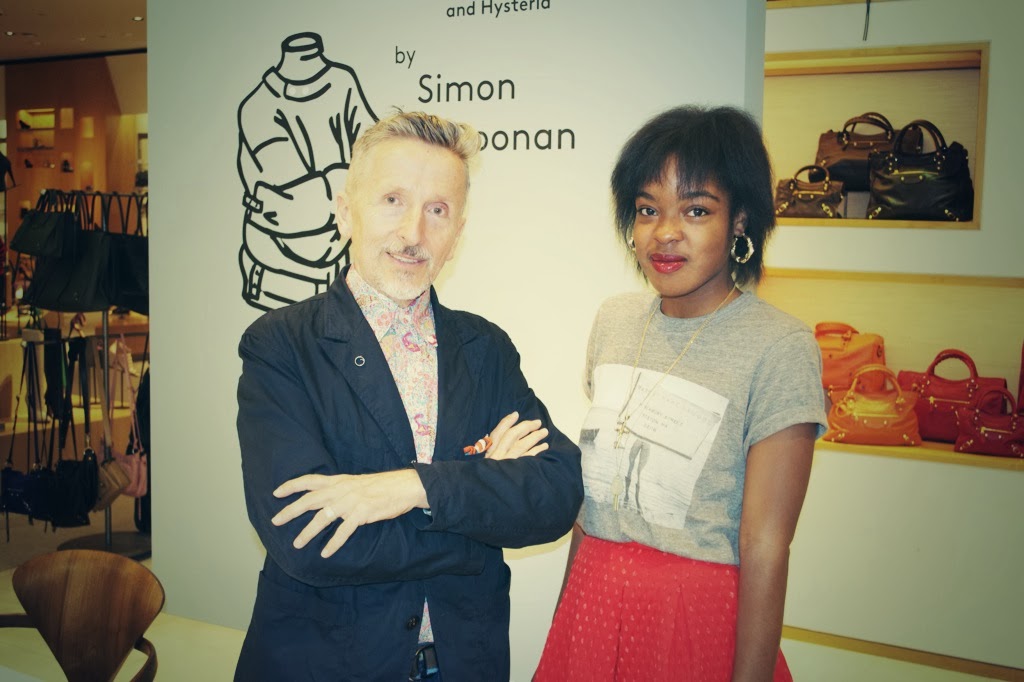 With his obscure eye for the preposterous and a love for eccentricity, Doonan’s personal couture reminiscences of fashion; proves himself to be one of the sharpest humorist writers to date.

On the streets of Paris »