English Tea and Shoes with Tabitha Simmons at Saks

Stylist turned fashion editor turned footwear designer Tabitha Simmons‘ glamorous shoes are an industry favorite. Handmade in Italy, collections are inspired by her worldwide travels and British upbringing. Combining a tough and sexy edge, yet feminine spunk to them with masculine touches. They’ve been seen on everyone from Alexa Chung to Miranda Kerr and are notable for their decadent embellishments that are timeless rather than trendy; the quirky English eccentricity all whilst exuding Couture craftsmanship. The Chicest Degree sat down with the Vogue magazine contributing editor and fashion consultant over English tea at Saks Fifth Avenue, Boston. The discussion consisted of this seasons most sartorial styles to covet. Look out for the Bonai perforated heeled sandal and the Helga mannish loafer is a fashion crowd favorite in the making. 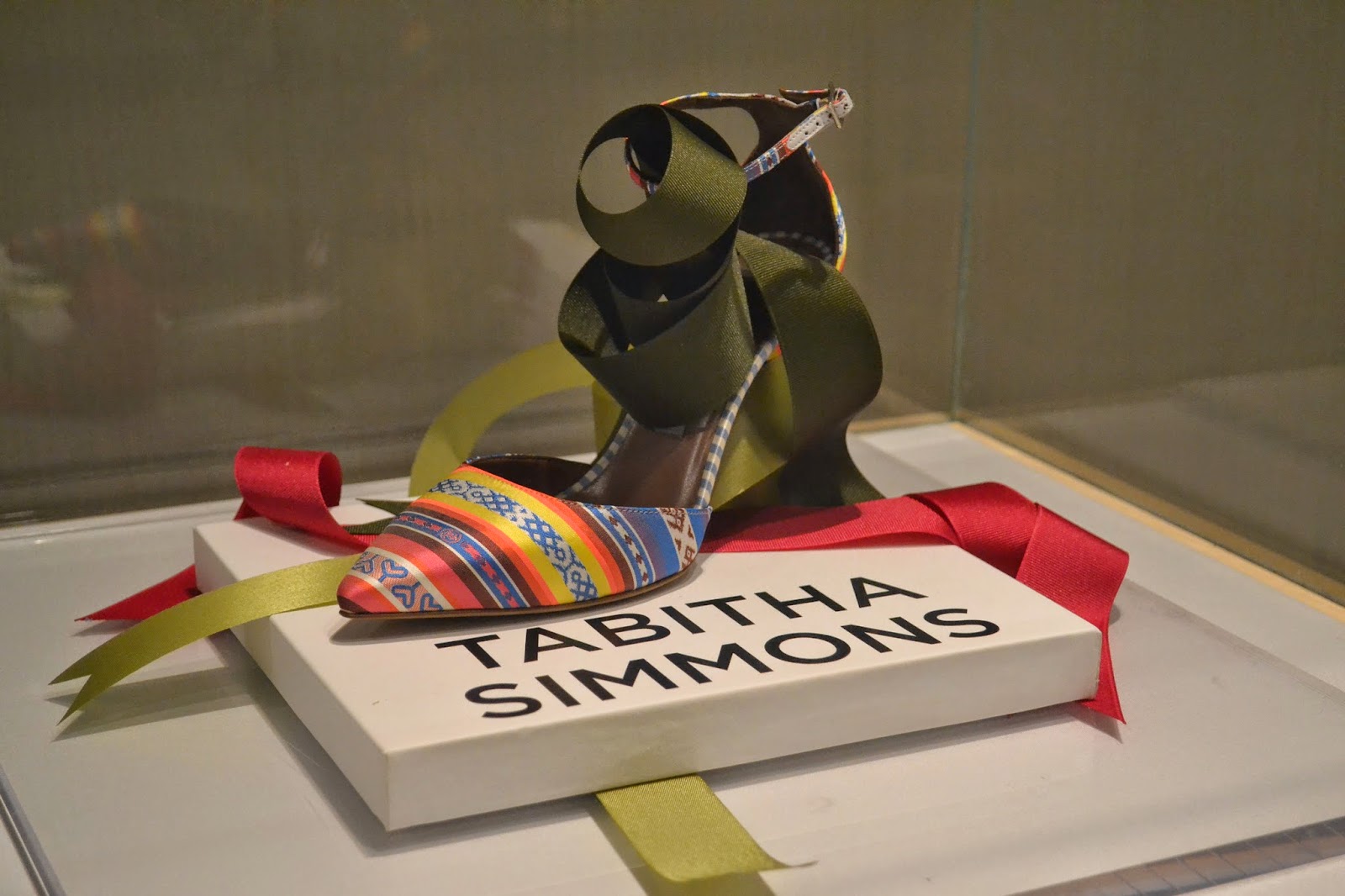 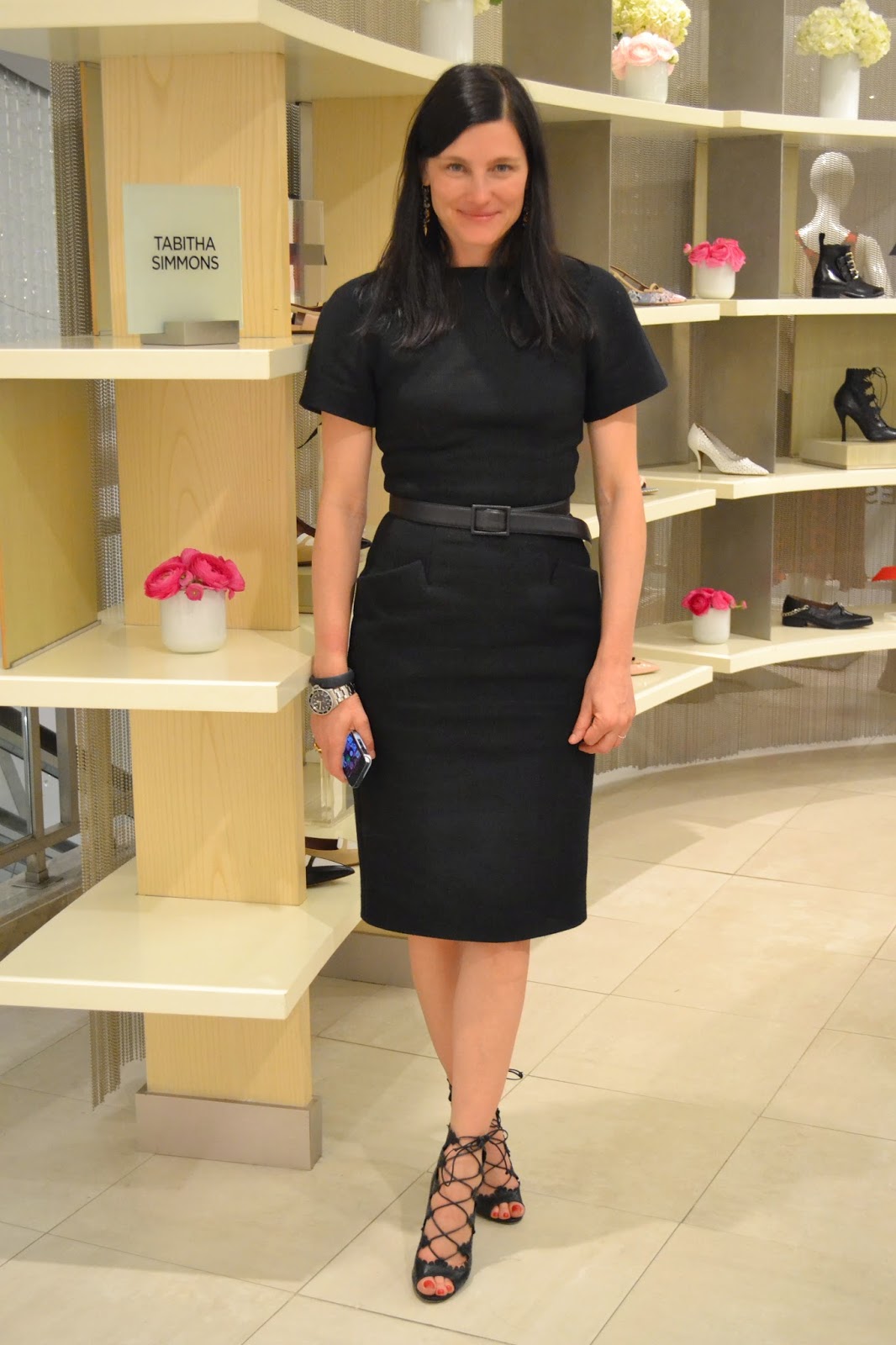 Chloé Manigo: Designed by a woman for a woman would be the best way to describe your shoes. They’re sexy and sophisticated, whilst combining feminine detailing and masculine touches.

For those who aren’t familiar, how would you define the Tabitha Simmons woman and what she wants in a shoe?

Tabitha Simmons: The Tabitha Simmons woman is, feminine and sexy, she is strong with an attitude yet sophisticated, her personality is tough and she likes something that’s a little bit different with a quirky edge.

Chloé Manigo: I get the sense with your shoes that each style is different and tells a different story. In which could be worn by any woman whether it is day to night and coordinate well with almost anything.

Tabitha Simmons: That’s what I’ve always tried to do, because my personal life is very different, one minute I could be picking up my children from school or on my way to a fashion week meeting the next. I’ve always liked shoes that can be worn anywhere, for example the Bonai. I was in China and I started at 9 AM and then finished at 11 PM, it was amazing because I worked all the way through still standing in them. They’re really comfortable and they felt great.

Chloé Manigo: A comfortable pair of shoes are hard to come by. A lot of times you might think that the shoes are going to be comfortable, when you buy them or work well with your lifestyle. Especially, being in fashion you need that pair of shoes to be chic and can be worn throughout the day.

How has traveling and your British upbringing inspired the creative process while designing?

Tabitha Simmons: Traveling is something that helps the creative process. The Peruvian bright print that we did for Resort came about when I visited Peru. I fell in love with the costumes, fabrics and all of the textiles. My British roots were also swept into the big washing machine of creativity. I get inspiration from many different places. It could be from a piece of furniture, a trip, to something that I just happen to see. I love butterflies, and feel like that is the Tabitha Simmons woman; it’s fragile but beautiful and has color.

Chloé Manigo: Tabitha Simmons shoes are defined by the use of the exquisite materials and different characteristics that they all tend to have. For example, the use of the exotic skins, the finest leathers and suede.

How have you mastered and maintained the couture craftsmanship of your designs that are highly collectable and wearable for woman?

Tabitha Simmons: I’ve been very strict and never settling for the idea that its good enough, I’m always trying to improve each time we do a collection. I have an amazing team of people that not only focus on the craftsmanship, but care about the overall fit and design as well, because I have to wear them. We’re always looking for that and to maintain that high standard of quality whilst striving to do better.

Chloé Manigo: What was is it that made you so eager to make the transition from being a model to focusing on styling? Which allowed you to combine personal style with your design background?

Tabitha Simmons: I worked over the summer in a store that sold designer clothing, and got discovered in there after I finished college. I really appreciated that because, I got to learn about styling. At that particular time you didn’t really know about stylists. Now, because of Rachel Zoe with her television show that focused on what we do and social media, people have become more aware of stylists and that job. When I came out of college nobody knew what that was, their was just fashion design or the history of art and people didn’t talk about stylists. It wasn’t until I was a model and discovered that job, then realized that was what I really wanted to do; which led me to interning at a magazine.

Chloé Manigo: How has being a contributor to Vogue magazine and collaborating with photographers like Mario Testino or Peter Lindbergh allowed you to combine styling with your keen eye for design?

There’s a team of people and you begin to trust them. For example, the hair dresser might have an idea to bring to the table that you might not have necessarily thought of. You need to have that ability to say that sounds great and lets go for it. With shoes, it’s much more distinct. 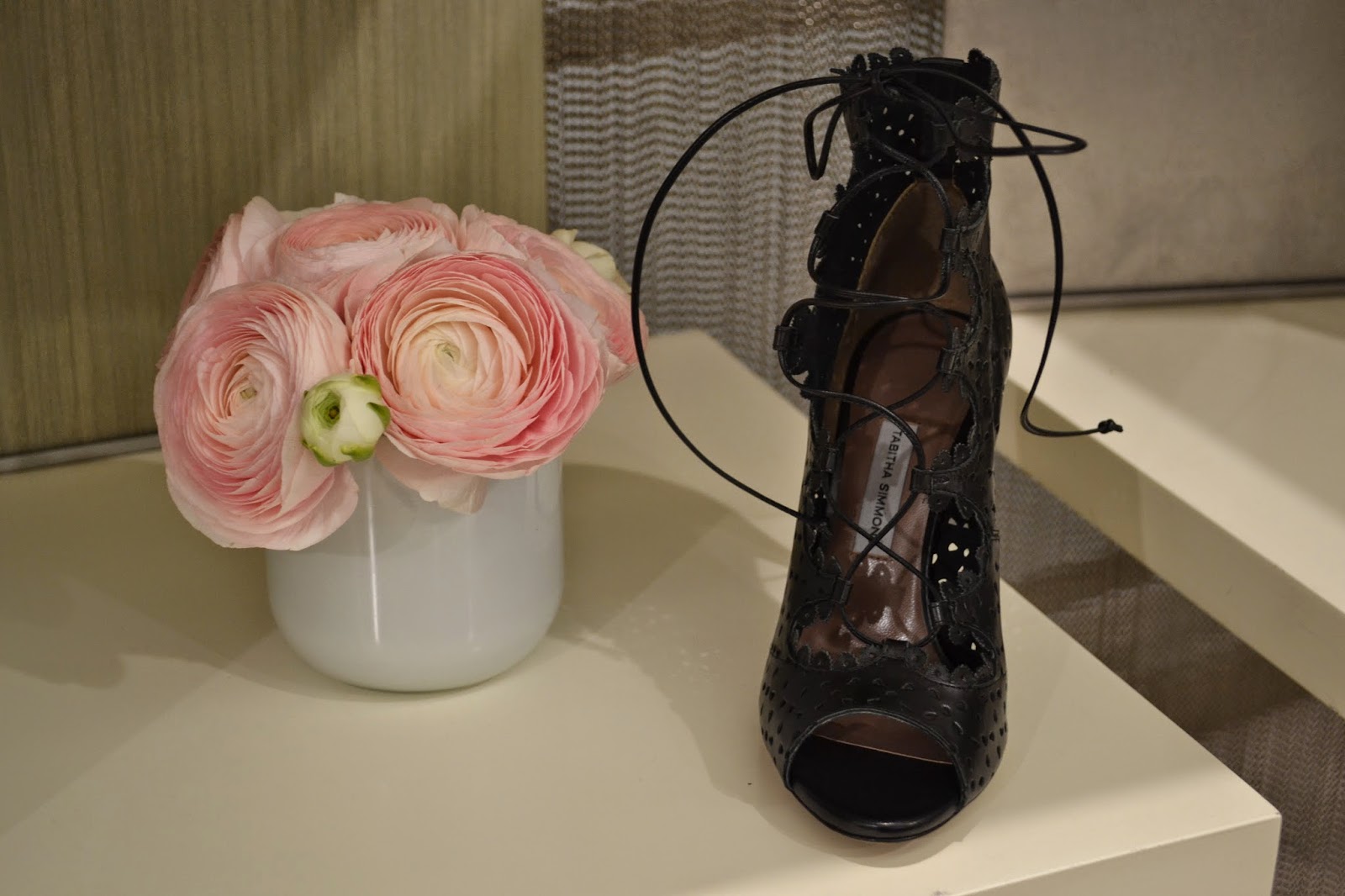 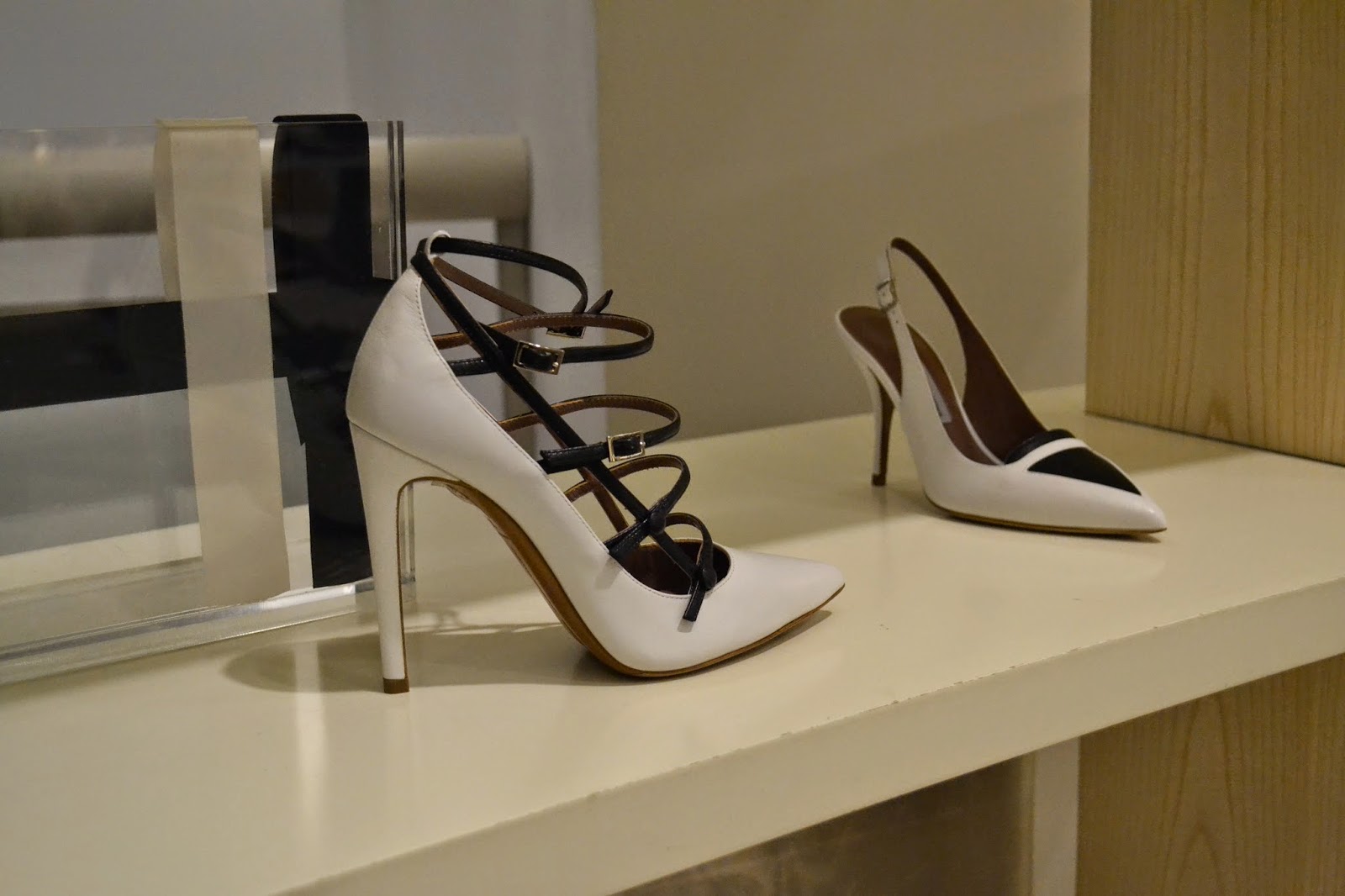 Chloé Manigo: You’ve styled many advertising campaigns for both print and television, in addition to consulting with designers for their seasonal collections such as Calvin Klein, Chloé, Fendi, Gucci, Dolce & Gabanna, Rag & Bone, and Marchesa.

How do you balance work and designing being that your day-to-day schedule can be very unpredictable?

Tabitha Simmons: With shoes, its more me time because there’s a long window to get things done. We’re getting ready to push the button on our Resort shoes and then we have a good 6-8 weeks to make it all work. We begin showing the beginning of June and then you have these two month where we’ll begin working on summer. On top of that I’ll be doing styling for designers and contributing to Vogue.

Chloé Manigo: Some of the highlights from the S/S’ 14 collection are Peruvian–shirt stripe patterns, perforated leather, classic black & white which is very chic and neutrals with the combination of signature styles with updated editions like the Alexa and the Early.

Tabitha Simmons: Yes, I was on set with a pair of the Alexa’s on and Alexa Chung mentioned she loved my shoes. I then got very excited because I made them and then I named them after her. She wears them so I was super excited, the Alexa has become a signature style.

Chloé Manigo: Which shoe was the most exciting to see come from just an idea to an actual design?

Tabitha Simmons: I would have to say the Bonai just because, I really cut and chopped the fabrics. To see it come full circle it almost hasn’t left my foot, its kind of like a slip-on. It’s my absolute favorite that I found I wear everywhere and don’t have to think much about what to wear with them, which is always important. The Creatures of the Wind as well, we reversed it and put a little chain on it and that has been really popular.

Chloé Manigo: What inspired the S/S’ 14 collection? Each shoe is very much different and tell their own story but coordinate very well together.

Tabitha Simmons: That is what we think about and make a plan from the beginning. When I designed my first collection, I didn’t really have a core and now I have that. The Early is always on standby or always available and never goes out of style, on sale, or marked down. We sort of continue to build on that. Being a fashion editor you would start over each time, like I did with my first collection. Then I realized you have to keep those staples or things that work. It was a big learning experience coming from being an editor and working more on that side of the business.

Chloé Manigo: What can we expect to see from Tabitha Simmons come next season?

Tabitha Simmons: For next fall, we’ve got some really great Chelsea boots with a chunkier kind of heel and we have that Victorian element of design. We also did a lot of leopard which I hadn’t done for a long time. I know it never really goes out of fashion and has been seen all over the runway. Of course we updated the Early as well by adding chains and buckles, its always like a collage of a boot.

Chloé Manigo: What has been your most memorable moment while designing in your New York studio or in general, thus far in your career?

Tabitha Simmons: One of my most memorable moments was when I was standing outside the Marais hotel, about to launch my shoes. I was on my way to the party to present all my shoes for the press. I was terrified because I didn’t know if they would like it, or think she’s an editor and now she’s doing shoes. Their was a lot of uncertainty but I made that jump. I was standing there waiting to get into a taxi, this woman stopped me and said “I love your shoes, they’re beautiful.” I mentioned that I made them and was going to my launch party to showcase my shoes, and what she’d said to me meant a lot. 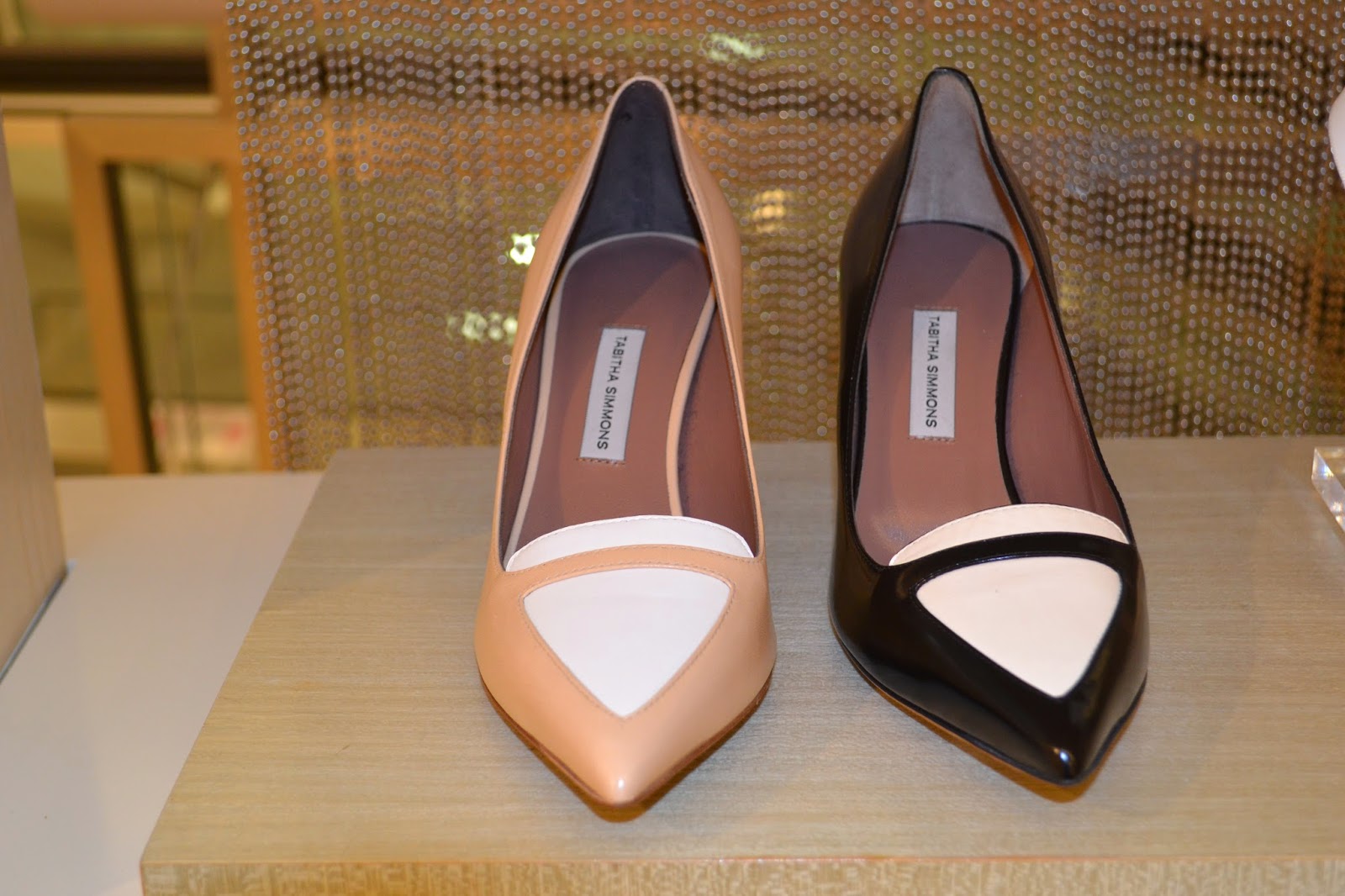 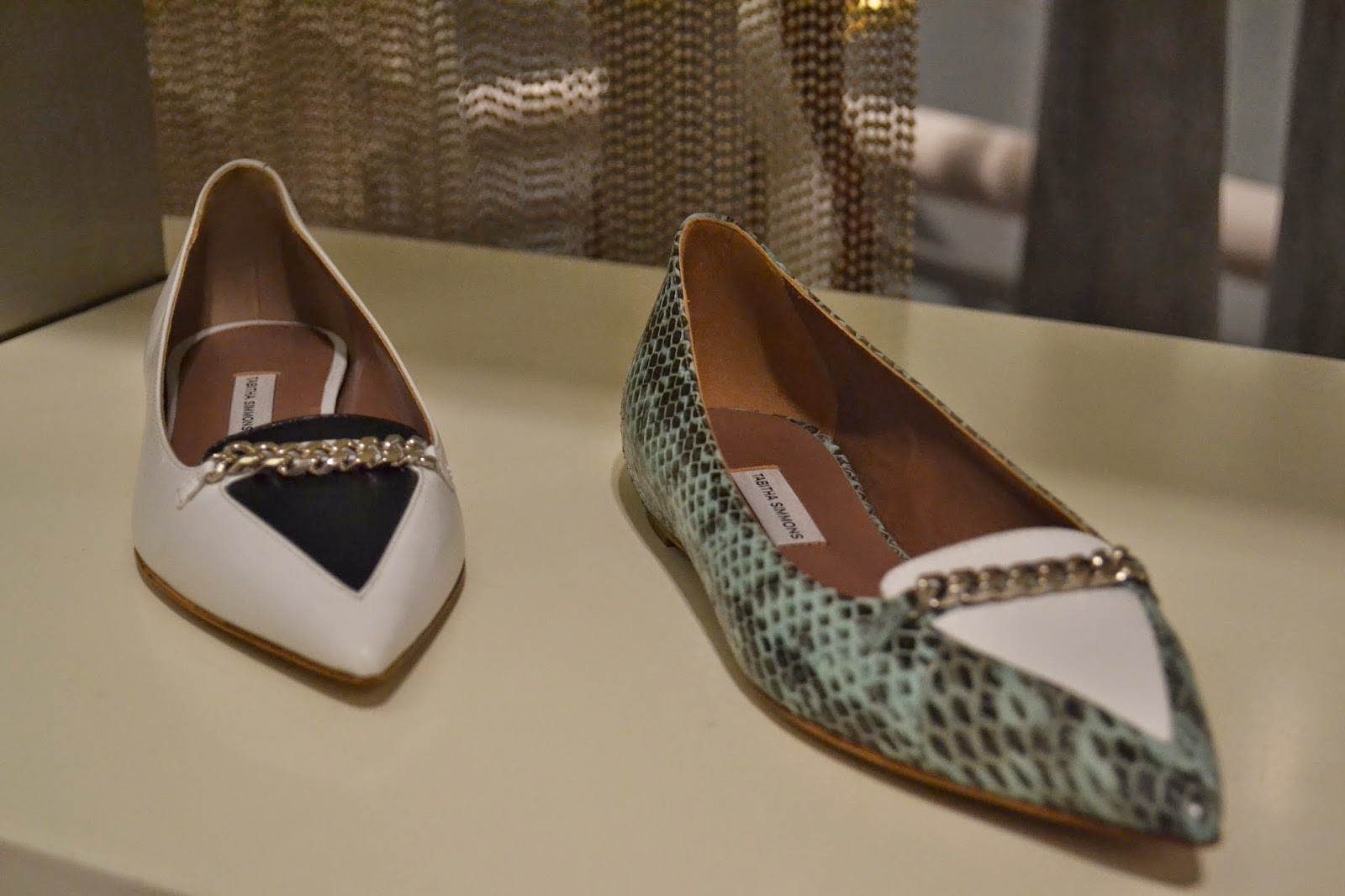 Tabitha Simmons continues to push the sartorial envelope by designing shoes for woman that have an appreciation for minimalism and subtle detailing, with a touch of the British nonchalance. We can only look forward to what Tabitha Simmons has in store for us all come next season.

« Daria Werbowy by Karim Sadli for Vogue US April 2014